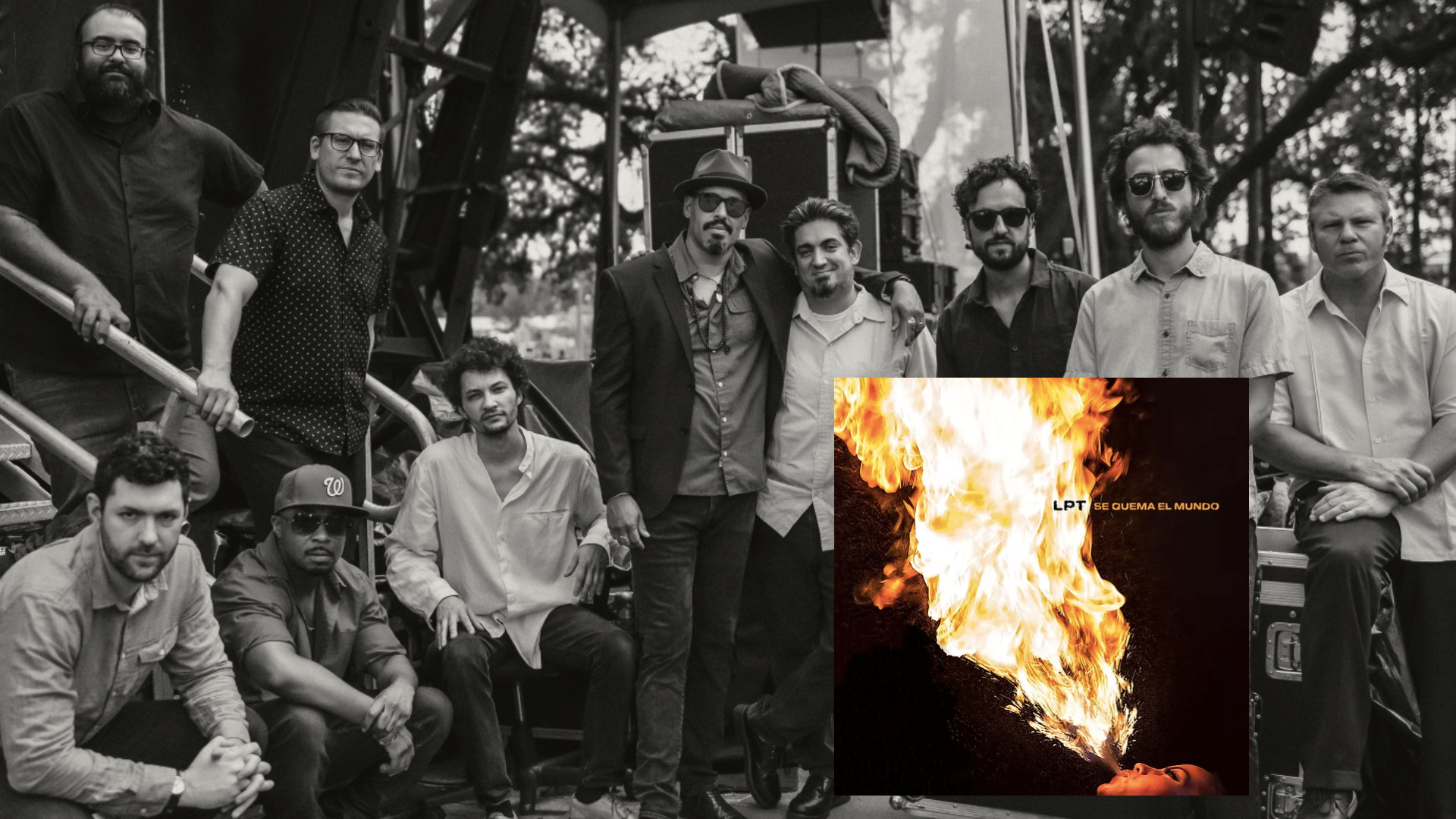 Jacksonville’s mighty 10-piece Afro-Cuban Salsa Orchestra LPT first introduced themselves through a series of monthly showcases in the backroom of Five Points watering hole Rain Dogs, enticing revelrous, full-capacity crowds onto the dance floor. From the jump, they were a force to be reckoned with.

A band with a promising future.

But right after the group’s debut of original material, the award-winning, nine-song collection Sin Parar, the world shutdown. With the brakes put on live performances, an open-ended global pandemic presented a laundry list of unanswerable questions.

For a band that makes music that’s tailor-made for cutting a rug, the new normal begged the question: What is LPT without a dance floor?

The group’s answer was Se Quema El Mundo (translation: The World is Burning), a nine-song full-length of new material. Written during the tumultuous year of 2020, lyrically the album boils over with social commentary. In true-LPT fashion, though, Se Quema El Mundo seems engineered for a post-pandemic world –– one in which crowded dance floors are enticing yet again.

On our latest installment of Liner Notes, LPT singer and chief lyricist Josué Cruz and composer and arranger Angel Garcia dropped talked about the inspiration behind the band’s new record.

Let’s start with the lyrical underpinnings of the new album. You’re writing this in 2020, the height of the pandemic, social and political unrest. You had a lot on your mind a lot to unpack. As music. Always, as music always been. Has music always been a cathartic thing for you guys?

Cruz: I think lyrically speaking, any music is cathartic, melodically and lyrically for any artist. It’s the way we know how to deal with the world and translate the madness into what we are able to manage within ourselves. So in the face of all that that was going on, you know, lyrically speaking it was, it seemed like the only thing to be able to do with the new album.

Garcia: I think [making this record] was crucial to dealing with what 2020 handed us. I mean, there was the pandemic. But if we think back to the George Floyd situation, and the insane political unrest, it seemed like, you know

Cruz: The world was burning.

Garcia: The world is still burning. And I feel like getting together and expressing this was the way to deal with it.

Cruz: Even for us on a personal level dealing, as a band, with the halt of the world and the halt of progress that was hard fought, this new album was us crawling out of that. It was us clawing our way back out of that hole and processing.

And let’s jump in at the top of the new record. Ya Basta, the album opener. Tell me about the inspiration behind that tune.

Garcia: Well that tune translates to “That’s enough.” And it really was sparked by what happened to George Floyd and, you know, just systemic racism as a whole and it rearing its head in such an ugly way. So it really came out of anger. And, you know, throwing hands up in the air, like, “When’s this gonna stop?” That’s enough. And speaking to a dear friend of mine, his daughter was facing racism in her summer camp that year. And just like, the emotional turmoil of having to explain that to a kid. I don’t have kids. I can’t imagine what that’s like. So that’s where that song was born.

Cruz: That was one of the first songs that Angel composed and then had some lyrical content –– a lot of lyrical content for when he brought it. He even approached me, “Hey, I got a song and I don’t know, man, it’s gonna be heavy.” And I was like, “Bring it on man. Let’s take a listen.” He had handwritten the lyrics on the front and back of a very small piece of paper. I bring that up because you could tell it was written, you know, as a need, right? If you understand what I’m getting at. He had to sit down and write those lyrics and get that out. To go back to what we were talking about earlier with regards to the catharsis of lyricism. That song, specifically, I kind of just helped massage it a little bit lyrically into what it turned into. But, you know, the idea, the concept, the fire of that song –– that’s enough.

Right. And despite the anger, you know, boiling over on that song, there is a lot of, I gather, finding light among the darkness on this record. And “Se Me Perdio,” which comes after the album’s title track, brings some levity to the record.

Garcia: Oh, absolutely. I mean,that song is about, you know, when you can’t find your stuff, man. It’s annoying, right? But it’s a funny take on that.

Cruz: We sat down and we knew we needed some balance, specifically because the album, lyrically, is heavy, man. And even that song, you know, when you dive into it, you’re losing things, and the question is, like “ Have I lost my mind?” So, there’s still that sort of joviality to it, and levity. And we had a really fun time because that song, I think, was one of the ones we actually retreated to this coastal house in Georgia for a week and we kind of locked ourselves in there. And we had some skeletons of some songs, and some we didn’t. That’s a song that was born at that house on the coast of Georgia, top to bottom. Lyrically, we left that place, it was done, you know what I mean? We’re stoked on that thing. Yeah.

What kind of things? Are you guys losing? There are 10 People in this band. Are you losing these things? Or are they just, you know, going missing among the members?

Cruz: You lose you lose your mind. You lose the car. When we were on tour, I lost the key to the van. You can lose band members. There’s 10 of us. So you gotta make sure you can do a headcount at every stop.

Well, LPT’s Se Quema El Mundo is available on all streaming platforms. And it’s out on vinyl right now. Go to LPT salsa.com. To find the vinyl. Jose Cruz, Angel Garcia: Thanks so much for joining me. Congrats on the new record.

This interview originally aired on The Independent 89.9 HD4.

Liner Notes | Bebe Deluxe is Not Asking for Your Respect

There aren't any events coming up, but check back soon!
Ways to Listen