Those in the know are giddy about this state-of-the-art Steinway. 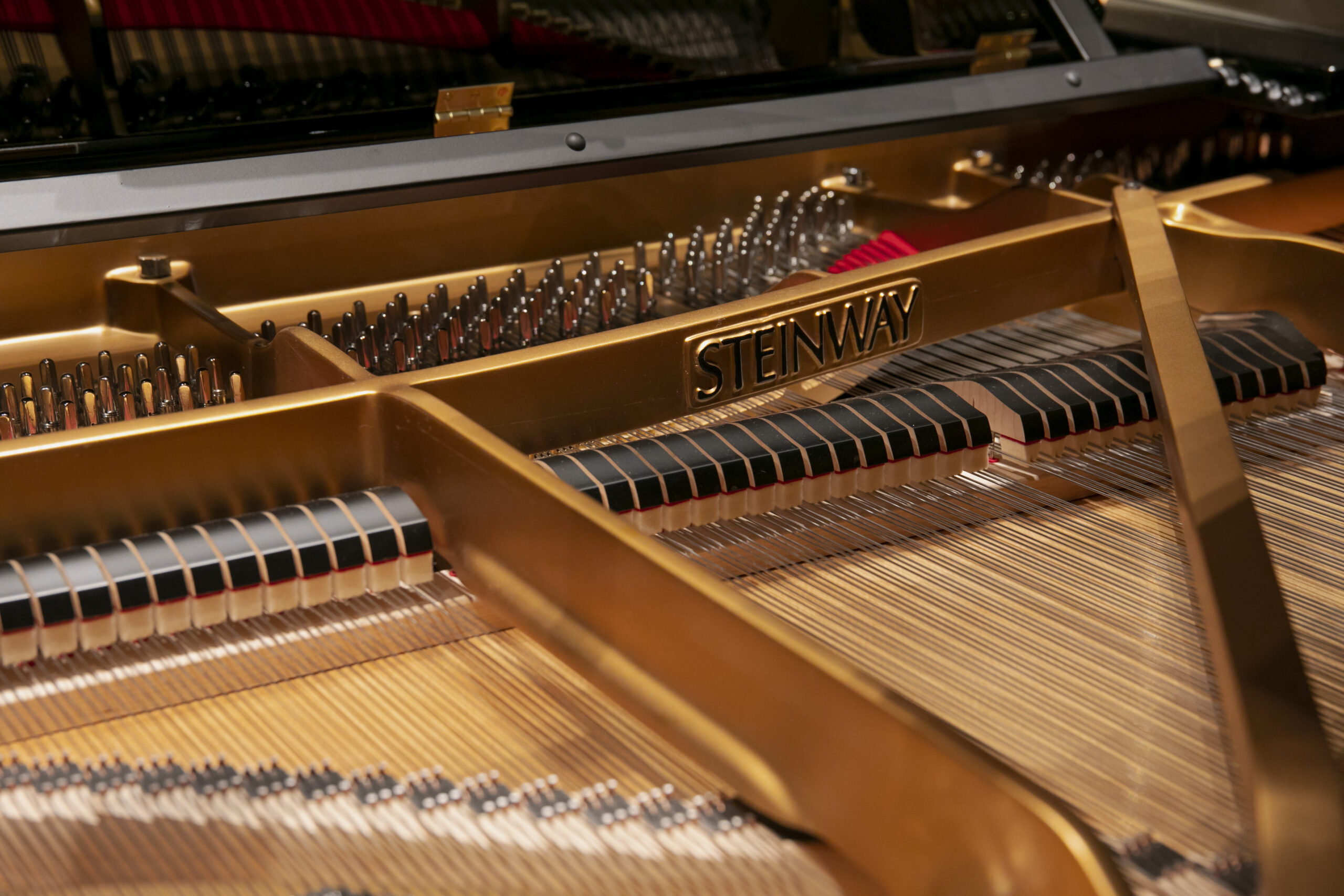 A look inside the Symphony's new and revered instrument | Credit: Photograph by David Steele

The Jacksonville Symphony’s 2021-2022 season includes the David M. Hicks Mozart Piano Series: an impressive roster of guest artists, all younger and celebrated pianists who are performing an equally savvy program of piano concertos composed by the 18th-century composer.

Tony Nickle is the Vice President & Artistic Administrator for the Jacksonville Symphony. He is also considered to be the symphony’s resident in-house expert in regards to the sound and influence of Steinway & Sons.

“From a historical perspective, Steinway has patented something like 125 aspects of the modern concert grand that we know today over its approximately 170-year history,” Nickle explains. “They made giant leaps in designs of the soundboard (the piece of spruce that naturally amplifies the sound from the strings), pin block, frame, key action, and many more aspects.”

To this day, every Steinway is manufactured by hand, Nickle explains. “So, every Steinway has a totally unique voice, which especially distinguishes it from a producer like Yamaha. Of course, that can have its positives and negatives, but most pianists would agree that a good Steinway allows for a greater range of sound and expression than pianos manufactured on an assembly line with homogeneity in mind.”

The mystique surrounding musicians and their instruments of choice is as crucial as any musical history and lore.

The 19th-century violinist Niccolò Paganini played with such fury that it was routinely rumored that he had sold his soul to Satan to possess such musical prowess. He navigated his highway to hell while playing his Il Cannone Guarnerius, an 18th-century violin that was his constant companion.

Jimi Hendrix enflamed his Fender Stratocaster as tribute to the feedback gods. Jimmy Page, always in season for being construed as a “friend of the devil,”  still slings his Gibson Les Paul loose and low.

While the jury is out on how many of their pianos have been immolated, and while the souls-sold-to-Devil ratio data of their signature artists remains inconclusive, Steinway & Sons is the de facto instrument for most classical musicians. In fact, according to the company’s site, a whopping 85% of concert pianists play the storied brand.

The company was founded in 1853 by Heinrich Engelhard Steinweg in Manhattan. Seventeen years earlier, the carpenter-turned-instrument-builder made his first grand piano in a humble DIY workshop: his kitchen, located in the town of Seesen. Steinweg eventually Americanized his name into Henry E. Steinway. At his NYC factory, he employed mostly German immigrants and within a decade of its formation, Steinway & Sons was producing roughly 1,800 pianos a year.

Steinway was an erudite and pioneering instrument designer: he carefully studied the acoustics and timbre of his pianos, and the influence that materials and engineering had in generating their tone. The 19th-century composer-pianist Franz Liszt was but one early vocal proponent of the unique sound of a Steinway piano.

“A good Steinway allows for a greater range of sound and expression than pianos manufactured on an assembly line with homogeneity in mind.”

Three of Steinway’s sons—William, Charles, and Henry—helped their father found and operate Steinway & Sons. In 1866, William Steinway oversaw the completion of NYC’s Steinway Hall, a 2,500-seat then-state-of-the-art venue that subsequently influenced the live music listening experience and framed what would become the industry standard for concert venues.

If Steinway & Sons has any industry peer or rival, it would be the Viennese company Bösendorfer, also founded in the 19th century.  Yet Nickle points out that there are nuances and preferences between the two pianos.

“When it comes to a Bösendorfer, the broad stroke comparisons get a little more difficult because both are hand made by phenomenal craftworkers and technicians. A Steinway is a bit more suited for a large concert hall and/or as a solo instrument with an orchestra, whereas the more elegant Bösendorfer may be preferable for recitals or art-song collaborations with vocalists. It’s really a matter of personal preference at that point.”

The symphony’s recent acquisition and purchase was made thanks to the generous donation of symphony patron, Ann Hicks.

“I learned of Ann Hicks’s incredibly generous gift around the end of our 2020/21 season,” says Nickle. “Our existing Steinway D was nearing its 25th birthday. For context, the average age when pianos are retired in our industry is 10-15 years, but of course the expense is no small consideration. Steinways are worth every dime, but $180,000 is a significant amount for any non-profit.” Nickle explains that the gift came prior to the 2021-2022 season and the Mozart series. “It could not have come at a more perfect time. We wanted to be sure to have the new instrument in time for the first concerto on our season opener in late September, so I contacted the Steinway factory in Astoria, Queens to schedule a visit in July for selection of the new instrument.”

This is the first “new” Steinway for the Jacksonville Symphony since the 1996 opening of the Jacoby Symphony Hall. While the piano brand is a sometimes-heirloom instrument for well-heeled families, passed down from one generation to the next, the wear- and-tear that Steinways incur from intense performances takes its toll.

“For a professional concert instrument, they begin to lose a little life after about the 10-year mark, but it isn’t like falling off a cliff; it just probably peaks around five-10 years of age,” Nickle explains. “A Steinway in someone’s home could easily remain around peak performance for much longer with regular maintenance by an excellent technician.”

The Steinway brand is a long-standing trademark of significance that denotes quality, elegance and surely, money. It’s surely a signifier of culture, even immortalized in the 1976 comedy The Pink Panther Strikes Again, when Peter Sellers’s Inspector Clouseau inadvertently destroys one of the prized pianos (Housekeeper: “But that’s a priceless Steinway!” Clouseau: ”Not anymore.”).

While there aren’t any famed instances of any manic virtuosi setting fire to their Steinway ala Hendrix (although prog-rock keyboardist Keith Emerson was known to stab and attack his Hammond organ onstage), not long after 9/11, the Steinway of Polish concert pianist Krystian Zimerman was destroyed by zealous U.S. customs agents at New York’s JFK airport because “the glue smelled funny.” Truly uncouth.

The Steinway & Sons ownership has changed a few hands since its inception: in 1972, CBS purchased the company from the family heirs. In 1965, CBS had also purchased Fender, thus pulling notable Steinway artists like Sergei Rachmaninoff and Cole Porter directly into the infinite, fractalizing lattice of “Six Degrees of Jimi Hendrix.”

In the mid-80s, a group of investors founded the company Steinway Musical Properties and purchased the company. Eventually, hedge fund company Paulson & Co. Inc. purchased Steinway & Sons in September 2013 for a hefty $512 million dollars. Not too shabby for a company started in a kitchen in 19th-century Germany. Today, Steinway & Sons produces 2,600 pianos a year, sold at 300 showrooms worldwide.

Tony Nickle’s passion for the sound of a Steinway & Sons piano and the artists who play them is evident. “Some giants of the 20th century included Vladimir Horowitz and Van Cliburn, and today we have artists like Evgeny Kissin and Yuja Wang,” he offers, as recommendations to hear the Steinway in all its enigmatic glory. (Wang is witnessed here performing during an exclusive NPR Music concert at the Steinway NYC factory.)

“They’re all so unique, but any of the Steinway artists I mentioned are excellent examples of the power, depth and brilliance a Steinway is often known for. Horowitz had his piano’s action significantly modified, and he would only perform if the presenter would ship in his piano. His piano exploded when he played, and the bass almost growled.”

If you have an extra $70, 000 clogging your pandemic-piggy bank, that might get your foot in the door to buying your own introductory level Steinway grand piano. Or better still, to experience the full sonic prism of a Steinway & Sons piano, check out any of the forthcoming Jacksonville Symphony concerto performances.