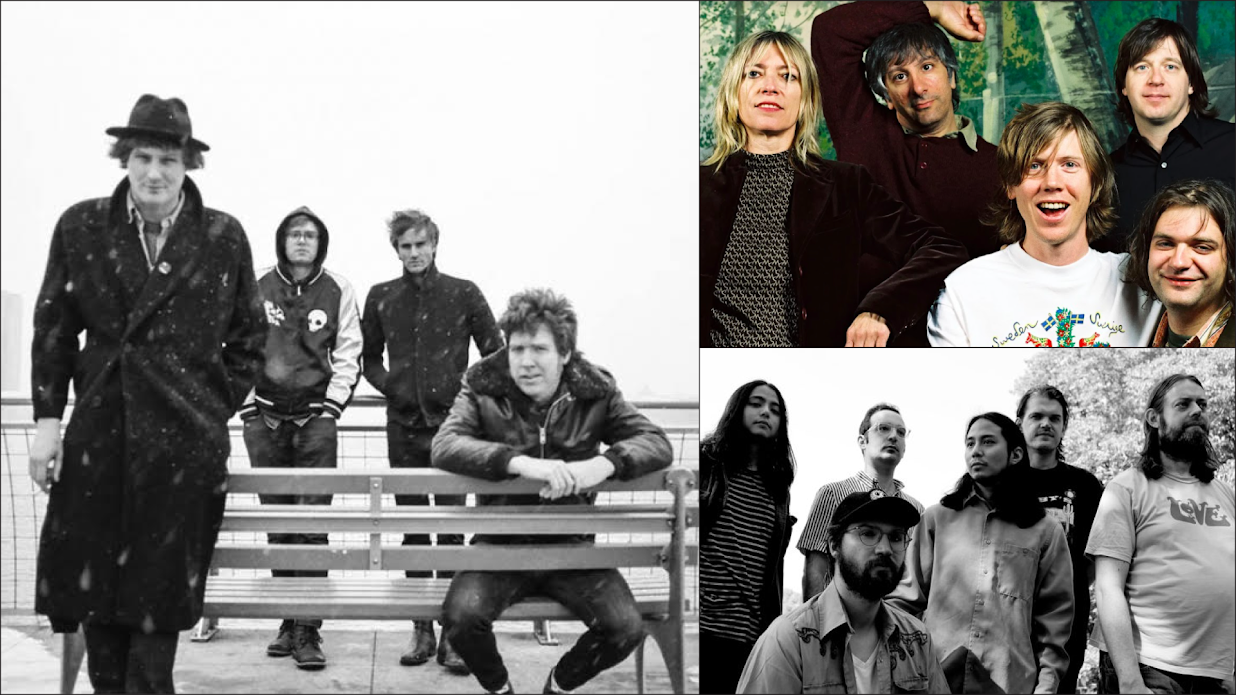 As part of their ongoing document of unreleased tracks, Sonic Youth are releasing In/Out/In, (Three Lobed Recordings) a five-song collection of unreleased instrumentals recorded from 2000-2010. Debut single “In & Out” features the band’s final, five-piece lineup with multi-instrumentalist Jim O’Rourke. Guitar harmonics trembling and shimmering, Kim Gordon’s stoned-word vocals, Steve Shelley’s drum rumble, and a nearly eight-minute running time make “In & Out” a hermetically sealed study of impermanent abstraction. Over the course of their career, Sonic Youth were as generous as they were inventive. Once lesser-known artists like Dinosaur Jr., Nirvana, and Pavement, not to mention esoteric players like Arthur Doyle, Frank Lowe, and the No-Neck Blues Band, directly benefited in varying degrees from a Sonic Youth name-drop/gig opener. By the time the band recorded “In & Out,” pop-commercial success had rightfully eluded them. The band became weirder and more intense after the grunge wave rose and fell. The careerist move would have been to add Dave Grohl as a guest player: instead, they recruited O’Rourke, one of the more inscrutable and experimental musicians of his generation. Sonic Youth were tastemakers and their flavor was just too intense, weird, and acidic for mass consumption. The same is said for “In & Out.” Fans who’ve long-since received the band’s trip-and-thrash gnosis are likely to explore In/Out/In; alt-rock listeners who tapped out after 1992’s Dirty will understandably have little interest in Sonic Youth’s late-era experimental continuum. But for ye that have open ears, please listen.–Daniel A. Brown

“A Matter of Time” by Savants

Brooklyn quartet, Savants, brings more lo-fi psych-rock into the world with the new single “A Matter of Time” (Narnack Records). Calculated distortion and precise sonic textures dance around a genre that forever college-radio-darlings Pavement holds tightly. Yet the Savant’s clear, layered vocals tinged with earnest ideations are more easily comparable to post-Velvets Lou Reed. The familiarly unique sound is amplified by the group’s use of analogue recording gear and utilization of DIY techniques like cutting tape and sticking it together to create loops. The repetitive tones are meditative and visionary, the perfect backdrop for any wastoid’s trip through life.–Rain Henderson

-Listen to “A Matter of Time” on Spotify

The current crop and glut of contemporary underground psychedelic bedrock is inviting yet dense. Fool’s gold abounds, disguised in limited-edition pressings, enticingly misleading hashtags, and guest appearances by “legends” measured by their murkiness. The reigning stone cutters in this Bandcamp quarry remain Brooklyn’s finest: Garcia Peoples. Prolific to the level of the compulsive, the current-sextet lineup just released Dodging Dues. At seven songs, it is a short (34 minute) but potent offering from a band that exudes a love of populist AOR rock as well as the kind of secret-handshake signifiers and casual obscurantism that has kept true psychedelic rock such a rewarding and roiling wellspring that still invites investigation and, for devotees like Garcia Peoples, deep participation. Produced by Matt Sweeney (here wholly tuned into GP’s sine wave), Dodging Dues’s album opener “False Company” rises up in rock patterns only to collapse into impressive slither, evoking high-aeon predecessors like 1970s Welsh psych-lairds Man and the Meat Puppets, the latter during their stellar SST-era “Are we the Grateful Dead? Are we ZZ Top?” identity crisis. The remaining six cuts offer up the same kind of febrile and captivating vibes.–Daniel A. Brown