The renowned musician tackles Mozart with the Jacksonville Symphony 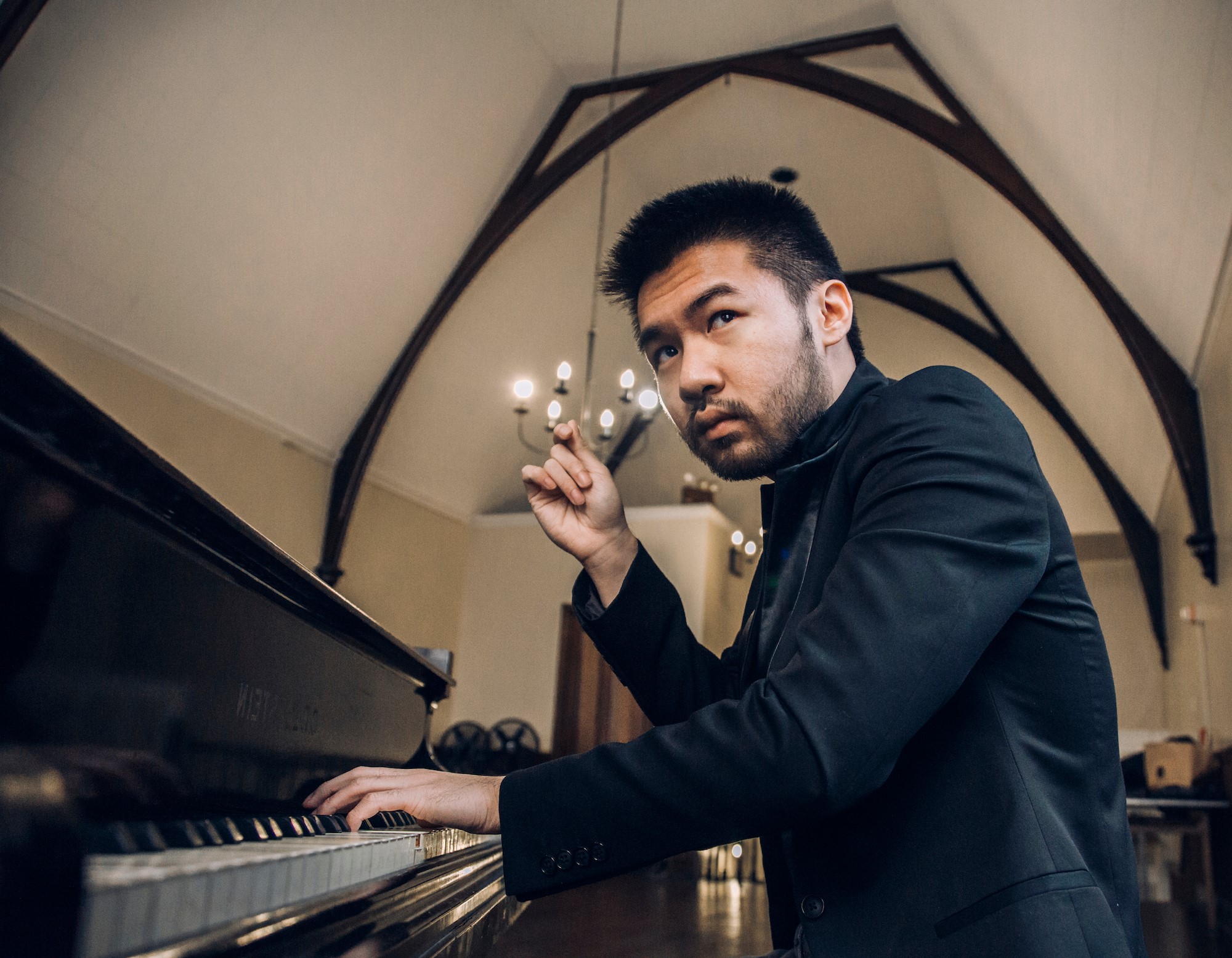 Conrad Tao performs with the Jacksonville Symphony on January 28 and 29 | Credit: Photograph by Brantley Gutierrez

At the earliest age, pianist Conrad Tao displayed quasi-supernatural, or surely genius, skills in performing music. The Illinois native began playing children’s songs on the piano while only 18 months old; he began violin lessons at the age of three, gave his first piano recital at the age of four, and five years later his family moved to NYC, so he could study at the Juilliard School’s Pre-College Division. While still in his teens, he began garnering critical acclaim from the likes of PBS and NPR for his innate talents as a pianist, violinist, and composer.

Now at age 27, Tao boasts a career that rivals and exceeds peers twice his age.

As a performer in solo or symphonic performance, he is as savvy at exploring the enigmatic jazz of polymath Thelonious Monk as he is navigating iconic works by Prokofiev or Rachmaninoff. His award-winning compositions reveal a musical mind that is fully tuned to contemporary music, while having an erudite and expansive knowledge of the history of classical music.

Indicative of Tao’s mercurial career, as Tau Tau he also composes and releases original electronic music. In conversation, Tao is humble and humorous, and he’s equally versant in Chick Corea and Lou Reed as he is in offering remarks on the subtleties of a particular centuries-old allegro.

There seems to be a certain air of mystique around Mozart’s Piano Concerto No. 24. What do you think are some key elements that make this piece particularly unique?

One very immediate feature of it that sticks out is that of the 27 piano concertos that Mozart wrote, this is one of two that’s in a minor key. And so just in the harmonic profile of the piece, it’s just markedly different from the rest in this category. And to get a little more granular, this concerto strikes me as unusual at how chromatic it is. Which is to say, in the way that it travels through all 12 tones of the Western scale, it kind of snakes through the scale often. For me, the effect is like he’s really gliding through the chromatic scale, trying, or exploring all the colors. There’s also sort of an uneasy searching quality to the music as a result. I think there’s something about the character of the piece as well, something about burrowing into every nook and cranny and searching and perhaps there’s a little bit of anxiety that results in perceiving that. And yet also, at the same time, really across all three movements of the piece, the music is very dignified and graceful, too. So yeah, (laughs) it’s great Mozart.

Even after a lifetime of experience in performing complex and intricate works by an array of composers, are there specific pieces that still psych you out and give you cold sweats when you’re ready to perform them in concert?

Sure. I think that there’s some music that for pretty complex, personal reasons, I just haven’t come back to yet. That’s what it feels more like. It’s music that maybe because it was so big at specific parts of my childhood, or music that I still have really specific associations with that I’m trying to that I would like, but settled a little bit you know. Those are some of the reasons why I don’t come back to pieces or composers very much but until later when the pieces seem to “strike me.” But I don’t think pieces stress me out anymore. I think it feels much more like waiting for the right time. For example, for several years, I didn’t want to play Brahms too much, where I think I didn’t yet feel ready to let the music flow through me organically: it just didn’t yet feel right. And then over the last four years, that’s changed a lot.

So, is it a case of “when is when the student is ready, the teacher appears?”

Yeah, you know you have to live the music: music is a reflection of life and you have to just let yourself live.

I’m most familiar with rock and jazz pianists and musicians like Bill Evans, and on the other extreme, Cecil Taylor, who have a very personal and recognizable tone on the piano. In the realm of playing notated, classical pieces, are you concerned much with leaving a legacy of a “Conrad Tao” recognizable tone?

I think it’s been more of a concern of mine in the past. I am now in a happy place where I would rather not force it too hard, either. Truth be told, it honestly depends on the piece. There’s some music that interpretively seems to be asking me to get out of its way. And then there’s some music that really asks for me to participate in this kind of rhetorical performative side: more nakedly. And so, it really does depend on the work.

This might be a somewhat esoteric or psychospiritual question but it’s one that fascinates me: when you are in performance, are you mindful and aware of an actual pronounced shift in your consciousness?

The answer is, “yes.” Yeah, I love it. I did some counting recently. And I played 20 concerts between October 13 and December 18. I don’t know if I always want to be working at that pace, but I’ll say this: given the historical context, especially given how difficult it is to perform sometimes, these days, it was so exciting to be able to get into this momentum of being an athlete. I do feel like I’ve gotten more and more in touch with the athletic side of what music making is, like the connection with your body. It’s a very beautiful and pleasurable thing. I like doing it both alone and with other people. You asked earlier about, like, how does one find their sound and when playing with a lot of people. I feel like if you’re trying to develop your music, trying to make your “sound” first, you’re not going to get very far. But if you try to develop your music-making at an almost-social level, where your music-making is a reflection of your social being as a kind of trace of your presence, then I think things change and things can organically grow. And the playing with many other people actually feels like this really intimate exchange of our humanity.

We hear so much about rock, hip-hop, and pop musicians collapsing from nervous exhaustion, but just reading about your accomplishments and performance schedule felt overwhelming. How do you navigate this intense working schedule while trying to live a semblance of sanity?

It can be exhausting. One thing that 2020 really forced me to do was confront just how much of a workaholic I am. (Laughs). I wish I had like an answer for how it happens but I think I’m just accustomed to it. I also really love being on stage. At the end of the day, it does come back to that. I love performing and sharing that with people. For me performing feels like part of the process. This wasn’t a conscious realization until I tried to verbalize it for interviews and but performance as part of the action and I think there’s less pressure if you don’t feel like it needs have these huge results, like it marks the “end of the road.” That’s just not what it feels like to me. In recent years, the athlete metaphor really has felt the most apt because it is kind of just like: “Okay, it’s a new season. Let’s get out there. Let’s play.” For the most part, that staves off any nervous exhaustion.

And considering how young you were when you began playing, it seems like you were wired to do this. Maybe it’s karma, maybe it’s genetics and environment. But it’s unique.

Frankly, it sometimes disturbs me when I think how much music has been my entire life. (Laughs). In some ways, I began playing the piano before I remembered anything else in my life. So, there are moments where I feel like the whole reason why I’m doing this—churning through the repertoire and performing concerts—I feel like I’m trying to just answer a basic, almost existential question. Like why do I do this? Why is this so consuming of my life?

Do you ever feel like your personal musical intellect and comprehension is ever distracting and gets in the way of a purely emotional experience of listening to music? I mean in the sense that if you’re watching some TV crime drama, you might hear the theme song and immediately think: “This piece is in ‘A Dorian’”?

That’s an interesting question. Objectively, it’s a little distracting sometimes and I’ll notice little things. But it’s not irritating. I’ll use the example of what you said, when I’m watching an episode of Law & Order: SVU, and hear a music cue, and my brain is like, slotting it into a key or something. I would say that does happen to me sometimes. But also, then what pings in my brain is like, “Oh, this movie must not be very good.” (Laughs).  I feel like I’m actually pretty able to turn it off to the point that it doesn’t interfere with my ability to engage with people. But whether the sort of analytical side of music-making and the emotional, maybe narrative aspects of music-making, might have tension? I will say, I think I tend maybe towards the more analytical. In some ways, I think that I love thinking about why the music is written the way it is. But even now as we’re talking, I’m thinking, “Oh, God, I wish I could talk about music in a less  horribly academic way!”