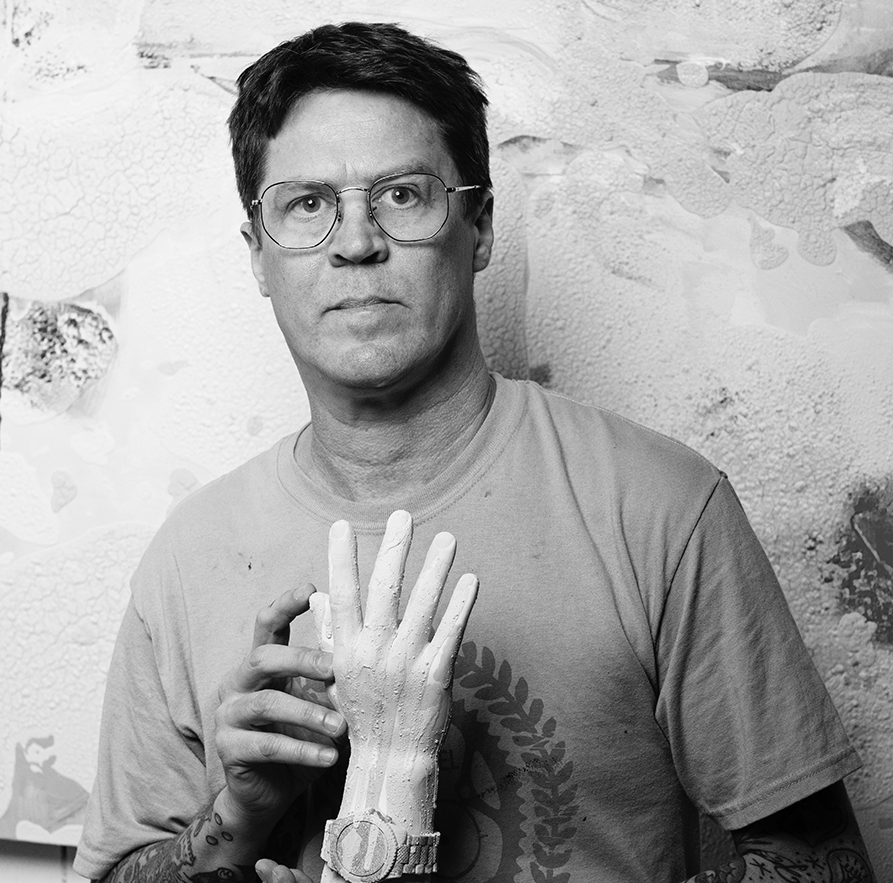 Sound & Vision is a semi-regular feature that examines how music influences Northeast Florida artists. Accompanying playlists for each Sound & Vision feature can be found on JME’s spotify channel.

During these groaning opening decades of the 21st century, it can feel like we are all living on borrowed time. Or maybe time on loan with the lowest possible APR financing.

Celebillionaires take selfies in outer space while nearly a billion people on the planet live in abject poverty. The disparity between the king’s hash-tagged feast and the pauper’s anonymous burial is played out through this prism of technology: Why wait for the effects of artificial intelligence when we can bask in an era that ostensibly celebrates actual human stupidity? Whatever you do, dear God don’t “read the comments section.”

Tony Rodrigues increasingly digs into these mixtures of materialism, iOSalvation, gleeful decay, pop cultural infection and the allure of the new and shiny offset over the fading expiration date. He keeps busy and remains prolific, notoriously so, not out of some chase and grasping, but because his work ethic is as impressive as it appears innately self-propulsive, if not compulsive.

Rodrigues spent this last September as the artist-in-residence for Long Road Projects. Aaron Levi Garvey and Stevie Covart Garvey started the LRP program in 2015 and it was originally based in Riverside, but is now located in Eerie, Pennsylvania. The impetus of the successful residency is centered on community engagement via exhibitions, site-specific installations, publishing limited editions and building direct relationship between the resident artist and the local visual arts community.

“I resisted Spotify for so long. But friends would send me playlists through there and then the algorithm will find some insane stuff that I’ve never heard before.”

Rodrigues chose the colorful, early 20th-century baseball player Dizzy Dean as one subject of his LRP print edition, which will also be featured in an upcoming baseball-themed show that Aaron Levi Garvey (a baseball fanatic) is curating, which opens May of 2022 at the Alabama Contemporary Art Center in Mobile. Among the other featured artists will be legendary illustrator Raymond Pettibon, known perhaps most famously as the artist who created iconic imagery for Black Flag and Sonic Youth.

Rodrigues’ being featured alongside Pettibon is a circular rhythm, a ricochet of influence, time, and persistence. Rodrigues is a direct product of the ‘80s DIY ethos, one not just limited to HC punk bands renting out Elks Lodges to hold nine-band gigs in a state of all-ages sonic desecration.

“The Pettibon thing is pretty fantastic,” admits Rodrigues. “Growing up I was into Pettibon’s aesthetic, and that overall ‘80s hardcore aesthetic of album covers and fliers with ransom note lettering, and collage or Xerox, in the true sense of the word Xerox: black-and-white intensity.”

While earning his B.F.A. at the Atlanta College of Art in the late ‘80s, Rodrigues soaked up the vibrant underground music scene, witnessing gigs by notable locals like The Subsonics, as well as memorable shows by the likes of Nothing’s Shocking-era Jane’s Addiction at the Cotton Club, and similar then-subterranean bands.

“I remember one of the first shows I saw when I moved to Atlanta was at this little bar called the White Dot. It was the Flat Duo Jets and they were just impressively maniacal,” he laughs. Rodrigues cites one Cotton Club show by UK psych-heads Loop as still “one of the very best shows” he has ever seen: “They were just loud as God with that heady drone. Unreal.”

Rodrigues’ exclusive playlist for Jacksonville Music Experience is a kind of aesthetic forensic of his tastes, running the gamut from the psych-rock of Can, The Black Angels, and Dead Skeletons to agit-prop tunes by Woody Guthrie, Gil Scott-Heron, Fela Kuti and Run the Jewels; the beautiful weirdness of Sun Ra, and deep-cut discoveries like William Onyeabor or Ananda Shankar’s hyper-“out,” sitar spin take on the Stones’ “Jumpin’ Jack Flash.”

Much of Rodrigues’ time is spent in the studio space behind his Avondale home, playing music as he spends hours creating visual art. “The playlist is just stuff I listen to in my studio. I resisted Spotify for so long,” he laughs. “But friends would send me playlists through there and then the algorithm will find some insane stuff that I’ve never heard before.”

“Growing up I was into [Raymond] Pettibon’s aesthetic, and that overall ‘80s hardcore aesthetic of album covers and fliers with ransom note lettering, and collage or Xerox, in the true sense of the word Xerox: black-and-white intensity.”

His upcoming Moving the Margins show at the Corner Gallery inside the Jessie Ball duPont Center is entitled Flex Deficit.

“Flex Deficit all about flexing what you have. What is your real worth? Which, in today’s world, is all material worth,” Rodrigues explains. “Who needs character or dignity? That’s not sexy. So, my show is essentially about economic justice versus economic injustice.”

The show is a logical evolution of Rodrigues’ work in recent years: the alleged musculature of global economy; the opulence signified through acquisitions like automobiles; residential and commercial buildings degrading from prime estate to overgrown rubble.

“Even the term ‘Americana’ you can sort of trace these peaks and valleys of American innovation, or just the health of the country. Just the proportion of who you are and what you own, or drive, based on your income—the exaggeration of identity through all this stuff. In the ‘70s when we kind of like ham-fistedly tried to get into energy efficient cars and soon enough we have SUVs: ‘America’s back, baby!’”

While there will be Rodrigues paintings peep-holing this vision of our limping contemporary age, for Flex Deficit, he’s utilizing the actual space to take advantage of its site-specific potential. Fake $100 bills teased from above on monofilament, 2D signifiers of gold watches and chandeliers. One piece is an assemblage-tableaux landscape of a jet airliner, and toy cars being observed, or threatened, by wild bears.

“That piece I’m calling Ursa Risen. It’s topographical, with hills and the scale of the bears compared to the cars is not proportional, so it feels disorienting,” he explains, of a piece that he believes could be viewed as a matter the preordained, the cycle of nature and cash money. “It’s economics: bears are bad but a ‘bull market’ is desirable.” Another assemblage is a gold-painted urinal, filled with plastic ice cubes and a champagne bottle.

“You know, in recent years I’ve really focused on things like consumerism, advertising, and kind of a ‘material reality.’ And I’m coming at this with obvious satire and criticism. But depending on the audience, and I don’t just an artistic audience,” he observes, adding with a laugh. “All of those opulent things sound pretty good! It’s what everyone seems to lose their minds over!”

The opening reception for Flex Deficit is held from 5-9 p.m. November 13 at The Corner Gallery inside the Jessie Ball duPont Center (40 E. Adams St., Downtown, Jacksonville). The show runs through January 29.

On ‘No Rules Sandy,’ Sylvan Esso finds freedom outside the formula

Fresh Squeeze | The Best New Music of the Month

What To Know About a Congressional Resolution on Streaming Royalties

Want more live music? We got you…
Ways to Listen