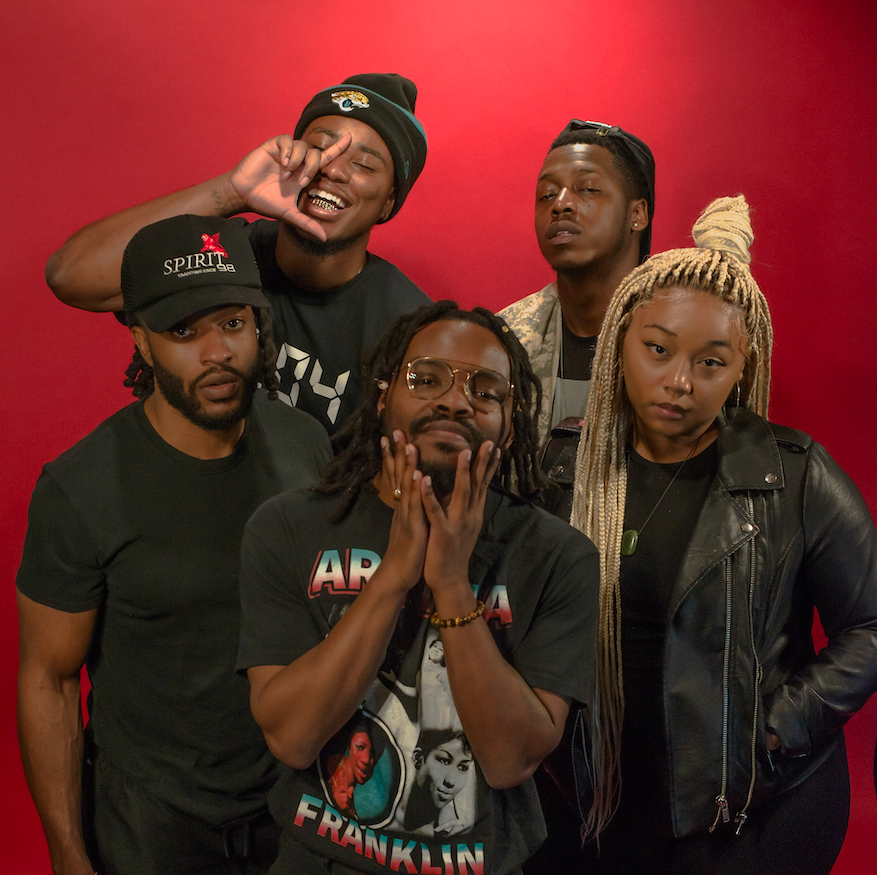 The opening track on 1827 N Pearl, the new full-length from Duval hip-hop collective L.O.V.E. Culture, begins with an invocation. On top of a few electric piano strokes and some puffs of soprano saxophone played by Christopher White (the Katz Down Stairz), singer and emcee Che Forreign wonders if her creator can hear her prayer: “I don’t even know if you’re awake. Does God Sleep?” she asks, before Flash the Samurai continues the plea, asking for “not the strength for you to move the mountains, but the strength for me to climb ‘em.”

The 14-track album unspools in that liturgical tone, with the group––Forreign, Flash, Spiritxiii, Easyin2D, and Rob Mari––searching for vigor and often finding it within themselves and each other via a chill-wave, downtempo collection of harmonious hip-hop and emotionally intelligent rhymes that, even when crossing into the braggadocious, more often cite spiritual searching and self-actualization strategies rather than any hollow get-money posturing.

“Mari was cut from the finest / all of my s*** was timeless,” Mari says as “DOES GOD SLEEP?” bleeds into track two “REJUVENATION,” before the group jumps in, harmonizing “My papa once told me,” in a call-and-response that serves to re-center Mari for his next rhyme: “Mari: raise your daughter as a lioness / swallow your pride and move in alignment.” It’s this unique group dynamic that, in addition to each member’s technical proficiency as an emcee, makes the sum of L.O.V.E. Culture (AKA the League of Vibrant Energies) greater than its individual parts. They hold each other up, often by holding each other accountable across, and often and within, their songs.

Through two EPs and a handful of singles, L.O.V.E. Culture has expanded its membership, adding the sonic fingerprints of several like-minded artists (Bobby Synthesize, LYD, Flo.Wav, TrashBeatsAlan, Huan, DJ Larry Love and Offbeatninja all have production credits on the new 14-song collection). They also recently lined up the support of global mega brand Coca-Cola; more specifically Sprite’s “Thirst For Yours” campaign, which makes use of the beverage brand’s following to put the spotlight on emerging artists.

Over the course of that output, they’ve honed their identity as a collective. They’ve always excelled at creating space for each member to step into the spotlight, while simultaneously falling in line behind one another. Where before they might have leaned on one another, on 1827 N Pearl, L.O.V.E. Culture seems to be building a metaphorical human pyramid, each member taking turns climbing to the top before attempting acrobatic dismounts, always confident in a safe landing.

That new found confidence manifests on several tracks throughout the new record. After a brief interlude (one of two on the album), the group mixes verses of laidback rhymes with sweet vocal leads by Forreign and wraps with surprisingly deft vocal-run by Spiritxiii on “MANIFEST”, before taking flight on the album’s two most-hip-hop forward tracks, the uptempo “LIFE AND DEATH” and the chopped-and-screwed-esque “2 PILLARS.” But even when traversing more traditional hip-hop and delving into well-worn tropes about opulent living, they seem more interested generational wealth than fleeting or individual riches (“growing up I had a dream to put my mama in a beamer riding clean with the peanut butter seats on” Forreign spits on “2 Pillars”).

The group delves into R&B and soul, channeling the eccentric queen Erykah Badu throughout  the album but especially so on “TRUST” and “DOWN,” while “INNER PEACE” blends a pop-y, radio-friendly hook (minus the expletive), with 1827 N Pearl’s most straightforward verse-chorus approach. Combined with the album’s cover art collage featuring Northeast Florida iconography, closer “PATEN LOCKE 4EVA”, an ode to late Jacksonville producer and emcee Paten Locke, touts the group as a product of Jacksonville, where hip-hop has been the lifeblood of the city’s music scene for decades.

1827 N Pearl is the gospel according to L.O.V.E. Culture. It’s progressive hip-hop, no doubt, couched in the group’s distinctive aspirations toward spiritual and emotional enlightenment. And with support from Sprite’s “Thirst for Yours” music promotion arm, the group will no doubt enjoy a much larger congregation.

This feature originally appeared on jaxmusic.org in August of 2021.