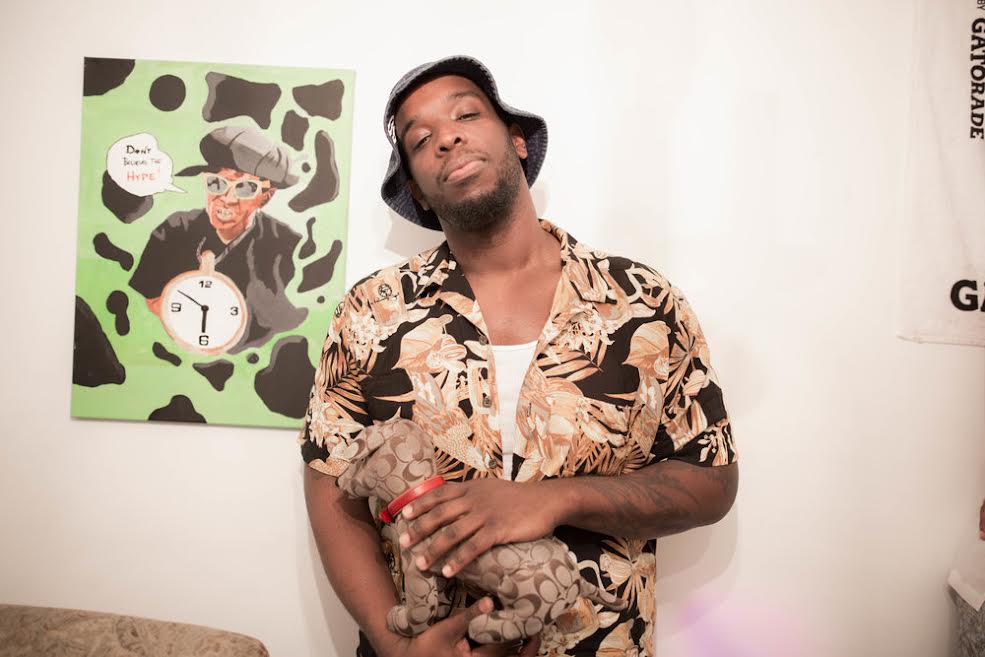 Something clicked for Freddy Bricks in 2020. He’d had been floating around the Jacksonville music scene for more than a decade before releasing his first studio album The Man Who Remembered Too Much, which earned Bricks high marks that year from Duval County’s hip-hop community. Then the floodgates opened.

That same year, he fed the scene, 11 Forks 1 Knife, a mercurial five-song EP that featured the ambient, laidback trap banger “Angel Dust”, a regional hit for Bricks. He’s put out two more projects since then––the six-song EP Kitchen Blues and the newly released full-length Blood On My Birkenstock), all the while expanding his network of collaborators and continuing to merge blues, throwback R&B, gospel and trap. As I found out when we spoke, Bricks has no plans of letting up.

I recently caught up with Bricks and asked him more about the philosophy that shapes his music (both as a producer and rapper) and about the prolific run he’s currently enjoying. Below are highlights from our conversation.

Let’s start with a tough one: Can you define your style as an artist?

I’d say very aware. I try to bring awareness to anything. I always create by considering my surroundings. I hear sounds vividly everywhere, I can’t even enjoy myself at clubs because I’m breaking every beat down. Me as a rapper? Word play, cadence and flow are very important to me. It’s not what I say, but how I say it. The tone is important. A lot of my rhymes are vulnerable experiences so I want you to feel me rather be impressed. Guys like Hov (JAY-Z) and Outkast taught me how to rap from a distance. I’m a student of the game.

You released four albums within the last year. That’s remarkable, especially for a Duval artist. What’s driving your prolificness?

Me and Cartier Cole planned this a year ago, to build our catalog. And I honestly planned to put six albums out [laughs]. I can’t afford to release once or twice a year, my peers in the game are blessing us with a projector on their camps monthly. With every release, I would run into some of the best young talent in Jacksonville, Florida, so I immediately jumped into producer mode, but I knew I needed to release music as a soft blueprint for local artists, and include them as much as I can to build the culture we need to thrive. Flash the Samurai (L.O.V.E Culture) reached out to me immediately after I dropped my first album and it’s been rolling ever since.

Your production has a heavy reflection on past R&B and gospel. Tell me more about your inspiration for using that era of music.

That’s just a product of me being in the back of my mom’s van soaking in her ears. She’s a random listener. One song would be Kirk Franklin, followed up by Trick Daddy, then Linkin Park. Soul and gospel music are sound first. Before any lyrics are added, the sound is what drove those records. Rapping came naturally to me. So I’ve always focused on building the sound around me I want to rap on.

Your music is clearly felt, understood, and enjoyed. But there’s an air of mystery to your identity that, as your music has increased in popularity, you’ve definitely leaned into. Explain the philosophy behind that.

In this game, so many elements are out before the actual art. So I decided if I was going to be an artist again, my art would be my face. If you want to find the true and honest me, go find my music. I show my face when my team needs me to and eventually, I’ll have music videos out but I want people to focus on the faces of the younger artists surrounding me. We need to see Cole, Tone Black, iindigoldd, Amood, Juuk, Simonne, Bascott, and Flash more, and of course, there is some marketing I’ve learned in protecting me as an artist by taking my time.

You scored an underground hit with “Angel Dust.” How are you dealing with the success of this record and do you plan to give the song video treatment?

Yes, there’s no way I can’t give that song a video. Much love to the local scene and places like SMKN WORD for the selfless love in jamming that song. I’m also glad the song is the focus and not so much me. The people chose that song and I’m honored to let it lead the way in the path I’m taking.

Speaking of identity. Before you released your first album you talked about the importance of an artist working with one producer. Do you feel that the formation of a consistent sound is important to the development of an artist, overall?

Oh yes, definitely. This has always been my stance. Having a bunch of random sounds on a project is cool. But is it cohesive? Half of that blame can go to underground producers in Jacksonville. Why not grab a couple of these artists and curate a solid sound? The culture is bubbling and if you’re about the art and seeing the Jacksonville rap scene grow to it’s potential, help some of these artists. Also, artists have to learn to take direction from the producer of the sound as well. It takes teamwork.

I’m glad the song is the focus and not so much me. The people chose that song and I’m honored to let it lead the way in the path I’m taking.

You also shared your thoughts about the Duval music community uniting more. What practices do you feel will assist with the growth of unity here?

I think it’s slowly happening. Rather it’s support and acknowledgment of your fellow artist or collaborating, everyone can grow. Also, media like JME and MPN Network are pivotal in the growth of the underground.

Name some of the Duval artists you’ve worked with and look forward to working with.

My very first collaboration on an album was with you. And that opened me up to the local culture and put respect on my sound. Guys like The Sun, Bascott, Flash, Simonne, Cole, Juuk, Tweet, IntricateTheAlmighty, Biz Levin, Higher Learning, Self, and Groove! For future artists, I’m looking forward to working with all the artists of L.O.V.E Culture, Cal, Rich, and Louie. There are producers whose sound I love, but haven’t met like Tough Junkie and Ninja. I would like to get a joint with Tokyo, Foo, and Spinabenz. Hopefully I didn’t leave anyone out, but they know what it is. In real life, it’s all love.

What’s next for Freddy Bricks?

A vacation [laughs]. I have about ten albums I produced for other artists that will be coming out throughout the rest of the year. My goal is to build my 28.0 brand up as the next hot underground crew. We have artists in every lane and it’s a crew full of bosses. Everyone owns their music and works together to get the job done. We are all learning and growing , we’re prepared for the rest of the year, we just have to continue to step up.