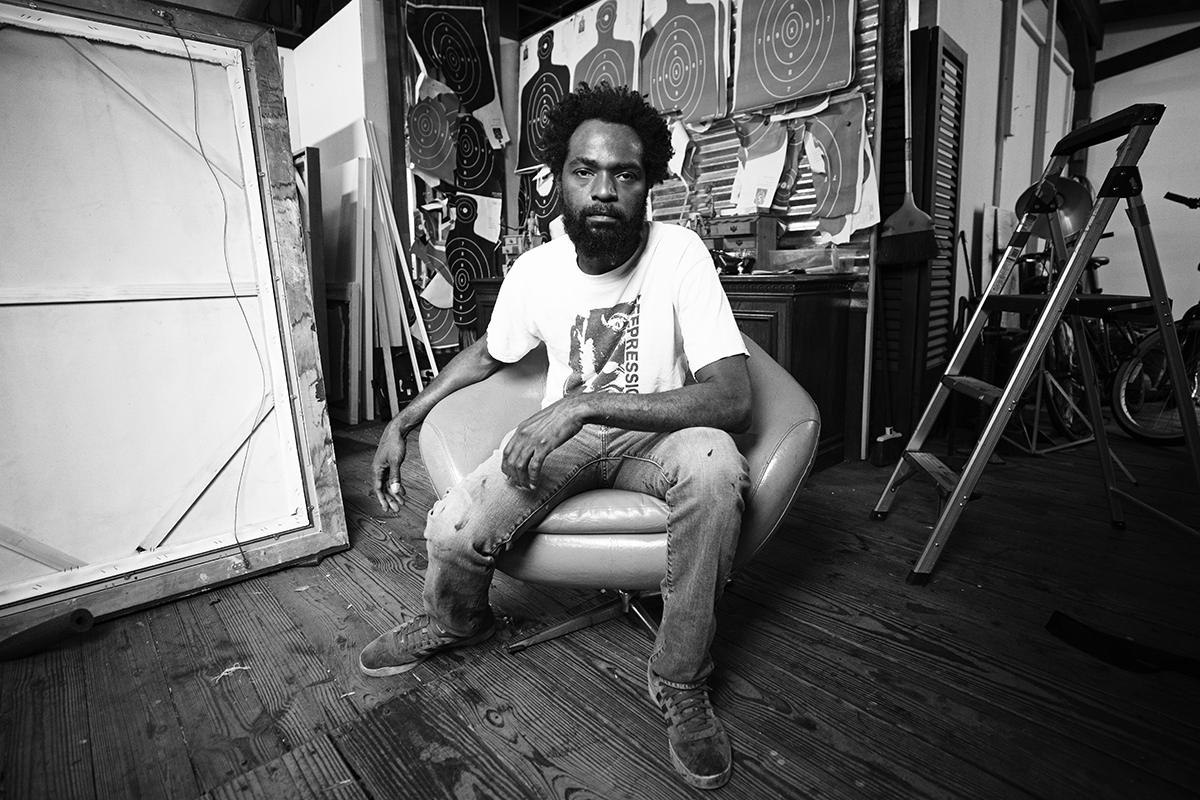 Sound & Vision is a semi-regular feature that examines how music influences Northeast Florida artists. Accompanying playlists for each Sound & Vision feature can be found on JME’s spotify channel.

Overstreet Ducasse taps into the realm of signifiers and symbols to create paintings that merge the political with the cryptic. Mixed-media works feature the human body suspended over shooting range targets. An afro pick becomes an emblem of racial identity, a parallel comment on ethnic disparity, and becomes a de facto power symbol of a trident-like strength. Hands are posed in communication of sign language letters that could easily be seen as esoteric mudras.

Adept at realistic representation that is filtered through the mysterious, Ducasse seems to create, if not expose, equivalents of the universally real and wholly cerebral.

The law of correspondences between music and art has been a longtime refrain in his work. “I listen to music all the time when I paint,” explains Ducasse. “I’m a lyrics person, especially when it comes down to hip-hop; the type of hip hop I listen to is mostly about the lyrics. You know, I’ve been listening to Steely Dan and R.E.M. for decades, and their lyrics to me are always obscure.”

He cites the music of Earth, Wind & Fire, the Doors, and the Rolling Stones as favorites during his early teen years. “I bought a lot of ‘greatest hits’ records at first. And those groups made it easier to kind of go deeper into their more obscure songs and albums.”

The music, aesthetic of continuity, and mythology of the Wu-Tang Clan has been a longtime presence. A fan of the Staten Island hip-hop collective since his late teens, Ducasse’s earlier Darts series is a nod to the WTC’s term for their always-thought-provoking lyrics. His current series Sign of the Time, which utilizes the American Sign Language alphabet fused on figures existing in Ducasse’s familiar universe of gun targets and blackboard, is inspired in part by the WTC’s signature science.

“I wanted to bring back the concept, which I got from the Wu-Tang Clan, of ‘Supreme Mathematics’ and do the alphabets from A through Z, using supreme mathematics, but using the sign language of the ASL.”

The Sign series is featured in his upcoming solo exhibit Triggered/Catalyst to Activism, located at The Corner Gallery inside the Jessie Ball duPont Center. Curated by Shawana Brooks, the show features an estimated nine new Ducasse paintings.

The presence of R.E.M. looms large over the Sign of the Time series, in particular their 1987 song: “Exhuming McCarthy.” Over the course of the tune’s three minutes, Michael Stipe’s lyrics denounces USA capitalism and “brand-ready” consciousness. The song’s refrain? “It’s a sign of the times / a sign of the times.”

“That song made me think about the time we’re in and McCarthyism and then the idea of ‘rock, paper, scissors,’ and how would I depict contemporary signs? Through sign language. And what is the symbolism for the sign of our times? Black Lives Matter.”

Ducasse feels like at times these correlations, many times seemingly revealed through his personal taste in music and easily motivated by universal current events, “line up” in a perfect tandem.

“I started studying McCarthyism and what stuck with me was the ‘blacklist’ and the ‘red scare.’ So, what would be today’s blacklist? The list of people who have been casualties of the police: George Floyd, Breonna Taylor, etc. the 2020 version of a blacklist. What would be the red scare? That’s easy: ‘Make America Great Again’ on that red cap. And then the ‘Chinese Virus’ and the ‘Russian Interference’—both red—and the electoral process and the election, fueled by ‘red.’”

Current works-in-progress are directly inspired by music: Patti Page’s 1953 version of the novelty hit “(How Much Is) That Doggie in the Window?” inspired Dog Innuendo. While “Pretzel Logic,” a titular 1974 cut by Ducasse favorites Steely Dan helped inspire his painting Nike Collinize (Colonizing with Kaepertalism).

“This Nike piece is a crazy one if I can pull this one off,” he laughs. “It’s gonna be crazy when you listen to it but whole painting is really about a shoe.”

The lyrics specifically during the break in “Pretzel Logic” are what gave light to the idea behind Nike Collinize: “I stepped up on the platform / The man gave me the news / He said, you must be joking, son / Where did you get those shoes?”

Transmitted via Ducasse’s prism of correspondences and esoteric imagery, Becker and Fagen’s ‘70s jazz-blues stroll is morphed into a comment on radicalism and global-corporate conglomerates.

“The whole painting is about the Nike coming out with a pair of shoes called the ‘Collinize.’ And their motto or slogan is: ‘Collinizing Capitalism.’”

New works from Overstreet Ducasse will be on display as part of the solo exhibition Triggered/Catalyst to Activism at The Corner Gallery inside the Jessie Ball duPont Center (40 E. Adams St., Downtown, Jacksonville). An opening reception will be held at 5 p.m. August 14. The show runs through October 29.