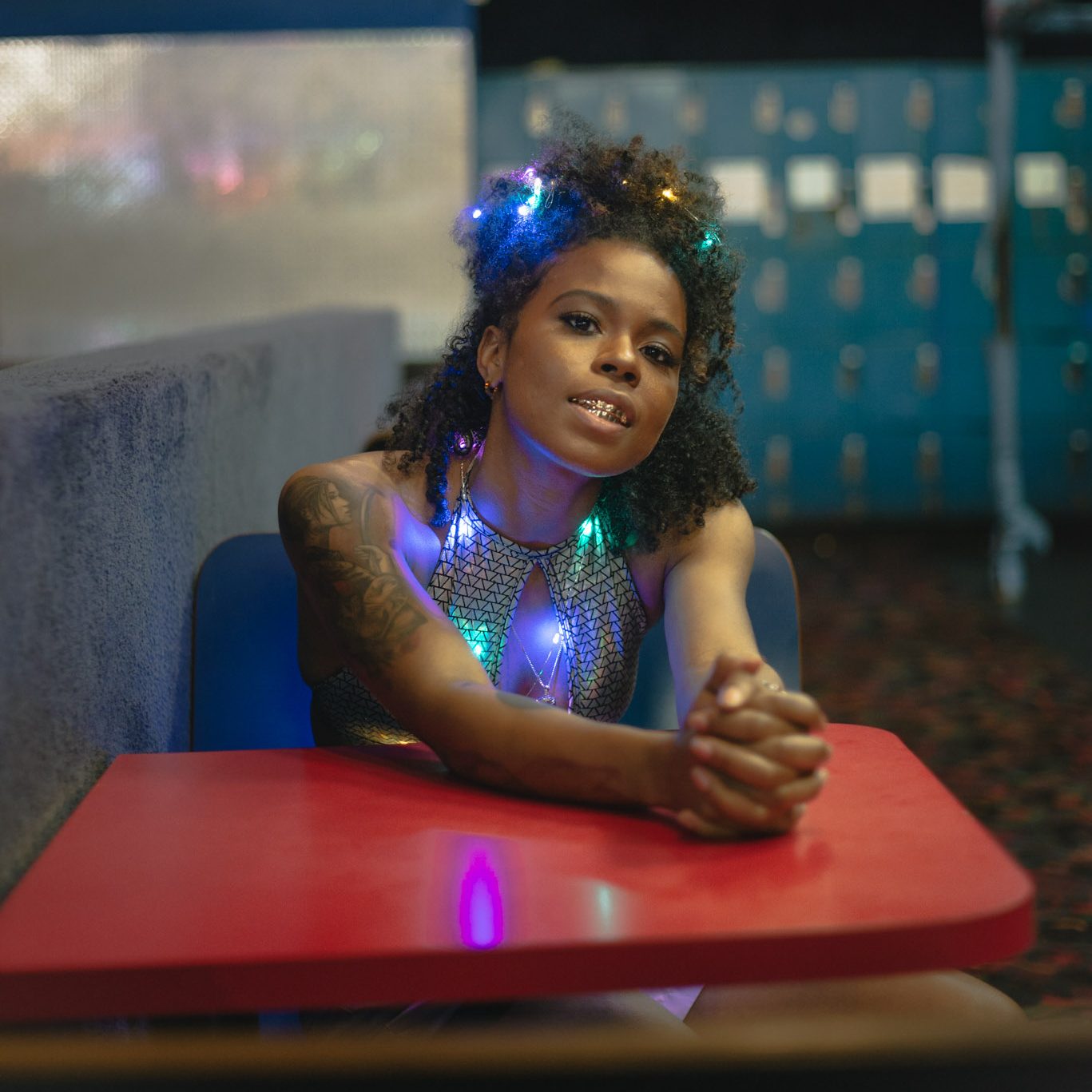 Purveyor of chilled-out bedroom hip-hop Moonchyldd has emerged from the confines of her sonic fortress of solitude with her sophomore album Florida Baby. On the nine-track EP Moonchyldd (AKA Briana Hughes) reaches into her singular Duval cool and laid-back style, with contributions by fellow Jacksonville hip-hop artists Rose, SettBabyKeem and Hughes’ sidekick and best friend Ampton.

Like most bedroom pop or bedroom hip-hop artists, Hughes releases music frequently on Soundcloud. So a fully realized Moonchyldd EP is certainly a special treat.

On Florida Baby, Hughes leans into mellow, approachable production, and proves herself a deft storyteller, chronicling trials and tribulations on the streets of Duval on album-opener “Rugged.” On “No Feelins”, she opens up about heartbreak with authenticity. The visual for “Verified”––the first single and video from Florida Baby––is a showcase for Moonchyldd’s playful flow, as well as a homage to Florida style.

Now with two EP’s under her belt, Hughes seems poised to garner attention from a broader audience. During a recent conversation, I asked this emerging Duval artist about her musical influences, her distinctive visual aesthetics and her recent spate of productivity. Below are highlights from that conversation, including a special guest appearance by a frequent collaborator.

Who are some artists that influenced you to want to create music?

Dang, that’s kind of hard to answer because I listen to so many people and so much music. I used to listen to Biggie and 2pac instrumentals and try to put my own spin to them. “Juicy” by [The Notorious B.I.G.] was one of my favorites. I’d freestyle over it with friends. Also I’ll say my peers [have influenced me], especially [mid-2010s Duval hip-hop artist] Dola. He pushed me. I also used to sing in the choir when I was younger and there was this one choir rehearsal where my choir director put us all in a circle because they were auditioning everyone for a solo. I was probably between the ages of nine and twelve. I got the part. I was like “Huh?” I can’t really sing, but I did the best I could. She told me I had a nice voice and that was the first time anybody told me that. It stuck with me.

How would you describe your sound? Do you feel like bedroom hip-hop is a good descriptor?

I kinda like that description. When people ask me that description I think about melodic rap or my track “Bicycle Day.” Like I said, I don’t really sing, but I kind of harmonize and that fits into melodic rap. I really do like the term bedroom hip-hop, though.

Your videos are fun and colorful. “Bicycle Day” even caught the eye of video producer Lyrical Lemonade. Is having a visual super important to you?

Yes, it’s very important to me. Before I started doing music, I wanted to create music videos. Anytime I listen to music it automatically takes me to a place. I automatically see something. I see how I would express it in a video. That’s before I even made music. Even with other people’s music, I imagine their music videos. I always feel like I have to make a video for everything. I kind of narrow it down to what would be easier to make a visual for or something that someone would be attracted to. When I made “Bicycle Day” I didn’t release the video until a year after the song had been out.

Do you create the treatments for your videos?

I usually do, but for “Verified” I told the production team the location and it was run and done. When I work with [local videographer] JG, I tell him my idea and he comes back with his idea and then we meet in the middle.

Lone Wolf; he made a lot of Brent Fyaz videos. Cole Bennet [Lyrical Lemonade]. And JG who I work with.

Your “Girls Dem Sugar Freestyle” song and video has such a femme influence in the sound, lyrics and visual. It was really cool to see you play with your style in this way. Do you feel you play with gender in your music or delivery?

Yes! I don’t like to put myself in a box. I’m pretty much a butterfly. I like the switch-up because I like seeing the different sides––she is doing her thang, and then she’s dolled up and stuff. It kinda shows people––and not that I care what people think––but it shows people that I’m not just in a box; so people can’t say “she dresses like a boy so she’s this” and “she dresses like a girl so she’s this.” People try to make sense of stuff and I’m just me.

You and Ampton are hilarious on the internet. How does your friendship pour into your musical collaboration?

Moonchyldd: She actin’ like she couldn’t be in it.

Ampton: This is a [expletive] Moonchyldd interview. I’ll be in the other room. She brought my name up so what’s up?

Moonchyldd: It’s so fun. We knew each other before. But the relationship grew from music. We were all cool on social media and then I posted…

Ampton: She was like “Who wanna hop on this track?” And I was like “Me!” I think I had wrote some sh** to [the track] like that night. We had linked up and I sent it to her and she was like “That sh** raw.”

Moonchyldd: Probably the next day, we just linked up and we’ve been close ever since.

I bring her to the studio with me. And if there’s a beat I like, I ask her to hop on that bit and make a song like right there.

Ampton: I swear like half the songs I’ve hopped on, I hear how she come on that b**** and I be like that s*** is raw! I never want to mimic her. I might not have written in a month but I have to when I hear her.

Moonchyldd: We have so much chemistry and, like she says, she never mimics my flow. She always complements it.

Florida Baby is considered your sophomore album. Your previous record Phases came out in 2020. What was the inspiration behind this new project?

I did Phases and I feel like those tracks are a little more mellow and I feel Florida Baby is different. I consider Florida Baby an alias in some ways. My momma be calling me a hippie. I feel like “Bicycle Day” is a different flow and I wanted Florida Baby to sound more Florida-based. Anytime somebody hears me rapping they always ask “Are you from Jax? It doesn’t sound like it.” When you hear something Florida you know it’s Florida.

I noticed that you release a lot of singles on Soundcloud. One of my personal favorites is “Cash It.” How do you decide what to put out on Soundcloud and what’s worthy of a full-length album drop for other platforms?

For 2021 I have so much planned. I’m actually shooting a video with SettBabyKeem for the song “Poison,” which is on Florida Baby). I’m also planning on doing a couple videos in July. I want to have at least four more videos by the end of July. Also I plan to do a mixtape with Ampton and another mixtape of just me with a producer I will announce in the fall.