10 Jacksonville Artists to Watch in 2022

These Northeast Florida artists are poised for a breakthrough 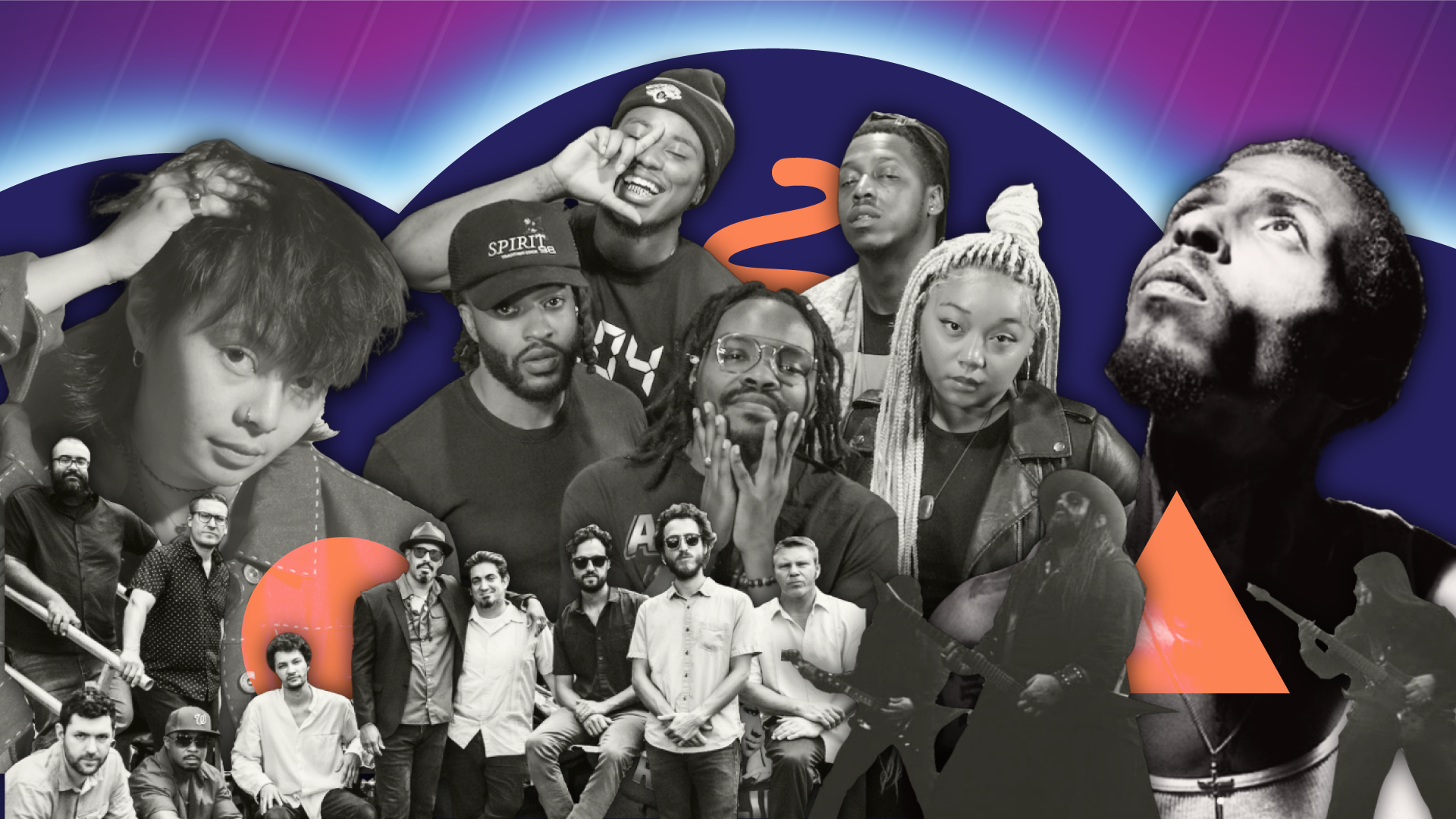 So, The Beatles are the most talked-about band in the world. Vinyl records are the most popular way to consume music. People are talking about Limp Bizkit. Taylor Swift’s Red, originally released in 2012, sits near the top of the charts. Kanye, Drake, J Cole, Adele and Tyler, The Creator have new music out. Oh, and Bob Dylan may have made more money than any musician this year.

This was the year in music. Wait… what year is it, again?

In 2021, we covered most of that and more over at the Jacksonville Music Experience, which was launched in May (another important 2021 milestone!). We also reviewed music from nearly 100 Jacksonville-based artists, as part of our Local Spotlight series.

To wrap up the year in Jacksonville music, the JME Team set out to identify artists who are poised for a breakthrough.

Here’s our list of 10 Jacksonville Artists to Watch in 2022.

The psych-pop music of Rania Woodard and Brian Squillace has been reverberating below ground for nearly a half decade. As LANNDS, the duo’s dance-y electronic umami––which combines earthy samples with tripped-out atmospherics, moist guitar leads and transcendentalist lyrics––has earned an estimable following on streaming platforms like Spotify, where they’ve amassed more than 6,000 monthly listeners. In 2021, LANNDS’ debut for  Boston-based Run For Cover Records, “In The Garden,” sprouted up on NPR Music’s #NowPlaying blog. The duo’s independently produced lotus EP will get the vinyl treatment in early 2022 and plans for a US tour are forthcoming.–Matthew Shaw

-Stream “In The Garden” on Spotify or Apple Music

-Watch the video for “HITEM”

Local affection only continues for L.O.V.E. Culture. The hip-hop collective’s prolific drive and combination of players keeps the group continually hitting the reset button. This year’s full-length 1827 N Pearl is populated by strong material like the single “Down”: a low-candle burn of suede-smooth jazz married to tight raps and nebulous soul, the seven-piece group once again truly moving as one. L.O.V.E. Culture seem to operate in a kind of hermetically sealed universe, yet one that they can invoke both on stage and on record.–Daniel A. Brown

-Watch the video for “Don’t Matter“

Songstress Ebonique is no stranger to Duval’s R&B scene. But her first-class voice garnered extra attention this year. In April, the singer-songwriter released the four-song EP Edge Control, a collection of sultry R&B that drips with the kind of freedom of expression enjoyed by an artist seemingly coming into her own. Duval musicians took notice, as Ebonique is slated to pop up as a featured artist on several releases in 2022 (stay tuned). Expect more singles and a full-length from Ebonique next year. And expect to hear many more fans singing her praises.–Al Pete

-Watch the video for “Edge Control”

Jacksonville-native Juan Mallorca aka Haun, serves indie-psych-pop with a side of neo-soul that grooves along the lines of Durand Jones & The Indications. He put out four singles in 2021. The latest, “Neverland,” offers steel-drum accompaniment to an otherwise straight up indie-pop tune. It’s these little twists and turns that make Huan’s music pop. The song also features a few two-bar, filtered break-beat sections that cement Mallorca’s rep as a multi-hyphenate: artist and producer. His music is a little bit disco, and a little bit emo; the ultimate combination for a feel good bop. Consider this a little hint to get acquainted with the name so you can say you knew Huan back when indie still flowed through his veins.–Glenn Michael Van Dyke

-Watch the video for “Brainstorm“

-Watch the video for “Milk & Bones”

Ten-piece salsa orchestra LPT burst onto the Jacksonville music scene in 2015, performing high-energy versions of Afro-Cuban staples. The band’s 2020 debut of original compositions, Sin Parar, went on to win an Independent Music Award for Best Latin Album. In 2021, LPT released their second full length, Se Quema El Mundo, featuring nine new tracks that, written in the salsa-con-conciencia style, are as thought provoking as they are danceable. The group’s lead vocalist Josué Cruz called the album, which should also be available in vinyl in early 2022, “a real high-water mark” for LPT. “The pressure to record and release new music won’t be there like it was in 2019-2021,” Cruz says of the group’s plans for 2022, which include several out-of-town dates. “We are looking forward to getting out in front of people as much as possible.”–Heather Schatz

Jacksonville-based, self-proclaimed multilevel interrogative self-enlightenment organization, Kairos Creature Club, is leaving people wondering. Newblare, a Belgium-based site that covers emerging indie rock acts, asks the serious question “Is it a cult?” Whatever Kairos Creature Club is, it should be on your radar. Founded by Lena Simon (La Luz), Glenn Michael Van Dyke (BOYTOY), Matt Shaw (The Mother Gooses) and James Scott Rubia (Animal Clinic), just before the pandemic shut the world down, KCC joined the independent record label Greenway Records in August of 2020. That same month the group released their first single, “Voodoo Success,” with an interactive, choose-your-own-adventure-style music video. The Club released, “Kevlar,” the group’s second single and accompanying visual two months later. The single “When The Sun Goes Down,” featuring King Gizzard and the Lizard Wizard’s Lucas Harwood, followed in March 2021. Finally, the band’s debut EP, Join The Club, dropped in August just before the kickoff of a month-long residency at seminal Los Angeles independent music venue The Echo. Rubia says the band has “a lot to say” and has begun recording their debut full-length. “This album is going to be us really coming together as one.”–Rain Henderson

-Stream Join The Club EP on Spotify or Apple Music

-Watch the video for “Kevlar”

Jahny Steel has cut a deep groove in the local hip-hop scene in a short time. In fact, if the last year alone is any indication, Steel has quickly shifted from emerging artist to fully established. Yet his lyrics, quick-cadential delivery, and mercurial and unorthodox production choices make him the sole player in his own game; one where he perpetually revises the rules. Case in point: his latest single “Godchild,” a blend of eerie synths, distort-boom, and his triple-time trance wordplay stitching it all together.–Daniel A. Brown

-Watch the video for “Crying For Free”

Leo Sun, the moniker for recently transplanted Jacksonville-native Matilda Phan, released two singles before jet-setting to the other coast, undoubtedly in order to bask in the California sun. With an NPR Music #NowPlaying feature under their belt, it’s only a matter of time before the West Coast catches onto Phan’s vaguely bossa-nova-meets-bubblegum-country-pop. Their two singles, “When You Wake Up” and “All Good,” are lighthearted without being vapid or airy––substantive, yet dreamy jaunts that worship a sun bath with someone you enjoy laying next to.–Glenn Michael Van Dyke

-Stream “When You Wake Up” on Spotify or Apple Music

The reverend was right: The Devil truly takes care of His own. Duval’s the Noctambulant has long-since stepped out of the shadows of the black metal realm. The band recently signed to impressive Dutch imprint Non Serviam Records for their latest full-length: Hellrazor. Well-earned hosannas from international media outlets, and post-pandemic gigs both local and regional, including an appearance at 2021’s Welcome to Rockville, all point to a prophecy of 2022 featuring the Noctambulant expanding their certain metal dominion.–Daniel A. Brown

-Watch the video for “Hellrazor“

The JME Team wrote about the music of nearly 100 local artists in 2021. We’d love to pat ourselves on the back, but we know there was plenty of music that snuck under our radar. Who did we miss? Drop us a line at: editor@jaxmusic.org