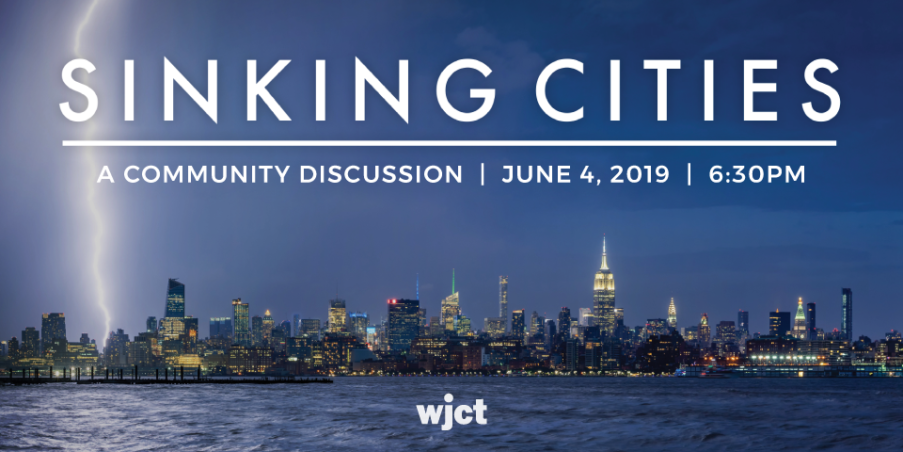 Join us at WJCT Studios for a community discussion of the PBS Series Sinking Cities and the effects of sea level rise on the First Coast, from St. Augustine’s historic sites to Jacksonville’s riverfront properties, and what people across Northeast Florida are doing to adapt.

This event is FREE but seating is limited and reservations are required.

Sinking Cities is a four-part documentary series which explores how four global cities are coming to grips with the real-time effects of rising seas and extreme weather. As the earth warms, sea levels rise and super-storms become more frequent and intense, many of the world’s major coastal cities may soon be under water. In the last five years alone, the United States has been hit with 83 hurricanes, devastating cities from New York to Houston.

Episode 1 – “New York”
Episode 101 | June 17th at 9pm
Discover how New York City – overwhelmed in 2012 by Superstorm Sandy – has learned from that disaster, and must defend itself against rising seas and the next big storm. With 520 miles of shoreline and no coastal protection, engineers and urban planners are tackling the problem with urgency and creative engineering. The premiere coincided with the sixth anniversary of Hurricane Sandy on October 29, 2018.

Episode 2 – “Tokyo”
Episode 102 | June 17th at 10pm
See how Tokyo is looking for new ways to fight back against rising waters. Typhoons, tsunamis, earthquakes and sinking neighborhoods threaten one of the world’s most populous cities, and the economic engine of Japan, with some of the world’s largest problems.

Episode 3 – “London”
Episode 103 | June 24th at 9pm
See firsthand why London’s Thames Barrier is no longer enough to keep the city safe from rising tides. The system has worked for decades, but due to increased environmental challenges, its location on a flood plain and heavy urbanization, London must now explore both low-tech fixes and some of the most advanced engineering solutions in the world.

Episode 4 – “Miami”
Episode 104 | June 24th at 10pm
Miami is beloved for its beaches and waterfront homes and businesses. See how engineers and planners are trying to protect Miami from rising seas and ever-more-frequent and violent storm surges that could destroy the city’s tourist and business economy.